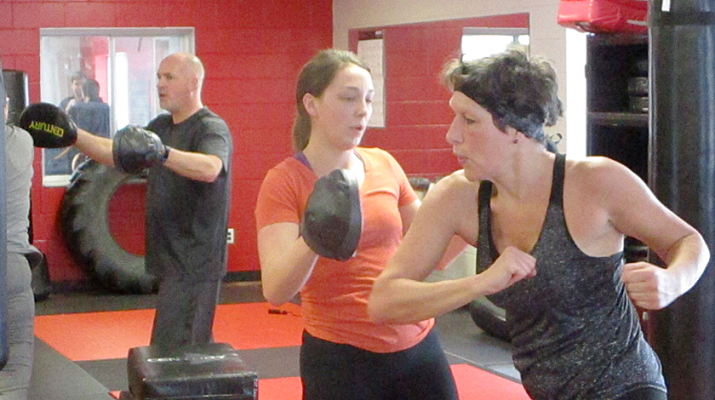 Get defensive about your workout

You may be intrigued to know that each of these variations of mixed martial arts packs in an abundance of health benefits.

While many folks think of mixed martial arts classes as a men’s only world — and jiu jitsu and karate classes as something only teens are interested in — more women are taking an array of MMA classes for a change of pace in their fitness regimen and for the extensive health benefits they provide.

Increased mobility along with improved flexibility and cardiovascular health are just a few of the MMA benefits. With workouts that amp up your ability to defend yourself in a world where such needs are ever growing, these classes help to lower your blood pressure and heart rate. You can improve mental concentration and relieve stress, which makes martial arts classes pretty much the perfect exercise option for men and women of all ages.

Sensei Michael Downs is the owner of the Defensive Arts Dojo in Hamburg. He has over 37 years of experience in martial arts. Having obtained his black belt in 1988, he is a chiropractor by trade but allots more space to his martial arts classes at his Camp Road location than to chiropractic care, and with good reason. His dojo studio offers over two dozen varieties of martial arts classes for all ages and experiences and will intrigue even the most fastidious fitness buff.

“Some people only want health benefits, so I suggest the martial fusion class, which works great for weight loss and still gives a martial arts component,” Downs said. “The Brazilian jiujitsu is a mix of everything self-defense requires — kicking, punching, and throwing, often from a ground defense.”

In the martial fusion class, attendees will work in pairs and as a group as instructors stress cardio exercise.

Expect to partake in anything from burpees and sprints, to glove boxing and kicks. The interval training can be varied in intensity to fit any fitness level, from beginning to expert. Once you get hooked on this class, you can add the “warrior fitness” class that branches off the martial fusion class, but kicks it up a notch — literally — with more extensive legwork and striking maneuvers.

In the Brazilian jiujitsu class, students use leverage and form to teach that a smaller, weaker person can successfully defend against a larger, stronger assailant. This class focuses more on actual defensive strategy. Much of the class is on-the-ground defense and has become a popular form of defensive art. A similar option, Therien jiujitsu, is a mix of everything that self-defense requires. Classes include kicking, punching, throwing, ground defense, and multiple attacker training. Expect to learn how to use joint manipulation and pressure points to ward off would-be assailants.

In addition to these specialized classes, Hamburg’s Defensive Arts Dojo offers a core group of karate and fundamental MMA classes. Many of the classes overlap in training despite their unique concepts. This helps participants become familiar with the defensive concepts in a variety of scenarios and builds on the person’s reaction ability and timing confidence.

April West agrees. While she is the resident massage therapist at the facility, she is often found taking many of the MMA classes or working out on the heavy bags.

Jeff Przepasniak was a member of the Defensive Arts Dojo years ago and made his way back after over a decade-long absence when he found his traditional gym wasn’t suiting his needs in variation of classes.

MMA is growing in popularity because of the range of classes available, diversity of movements that aid in the overall fitness of each participant, and the mere fact that as you are learn to defend yourself, you are also building strength and coordination.

“Martial arts has the advantage of having cardiovascular, muscular, and flexibility training all in one movement. It is the total package,” Downs said. “Martial arts is my way of life in every way — through personal protection, health and wellness, and friendships I have fostered along the way. It allows me the ability to help others. It will always have a role in my life.”