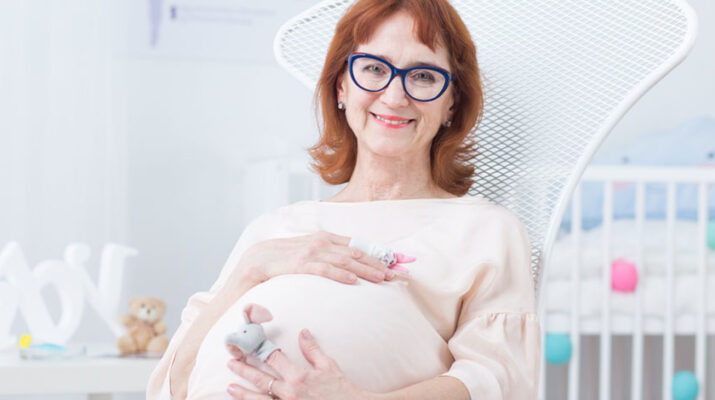 A study published in Menopause, the journal of The North American Menopause Society, suggests that later maternal age for a woman’s last child may indicate greater longevity for the mom.

While it is yet unknown if the ability to naturally achieve a later pregnancy indicates a healthier woman or if the later pregnancy causes a longer life, it is still an interesting finding.

Most news for older moms is not as positive. For many reasons, it is ideal for the health of moms and babies for mothers to become pregnant younger; however, life does not always happen that way.

“From what we know so far, if you’re 35 or older, it presents more challenges and you’re at greater risk for birth defects, premature birth, getting pregnant with multiples and complications in pregnancy,” said Darcy Dreyer, director of maternal and child health for March of Dimes across the region from Buffalo to Syracuse.

She said one of the reasons behind the uptick in complications is that many women as they hit their mid-30s are more likely to have chronic health problems such as diabetes, hypertension and high blood pressure. Fertility also begins to decline.

Dreyer encourages women who want to have a baby to get healthy before getting pregnant. “Everyone should try to get healthy, but if you’re hoping to have a baby, these things carry more weight. Get a pre-conception health check up at the OB/GYN and manage any chronic health conditions.”

If left untreated and unmanaged, chronic health conditions can contribute to more problems; however, the age of the mom also matters. A woman’s eggs are formed when she is developing as a baby in her mother’s uterus. She is born with all the eggs she will ever have. New eggs do not develop. The eggs age along with the woman, so with many women, eggs fertilized at age 37 are more likely to have suffered age-related degradation than those fertilized at age 27. To an extent, her lifelong health habits do play a role in the health of her eggs.

Physician Sarah Berga, president of UBMD Obstetrics & Gynecology and department chairwoman at UB, said that a major risk of waiting to conceive is not getting pregnant. “When they’ve studied populations that don’t use contraception, the last age for spontaneous conception is usually around age 42. We have many years of experience. We understand that not every woman gets the same number of eggs and not everyone’s eggs last as long. People run out and sometimes run out before age 40. Some don’t completely run out but their eggs aren’t as fertile.”

She added that for women at age 42, the chances of becoming pregnant without medical intervention is about one in 10,000.

“In the fertility business, we’d rather see people try when they’ve discovered a problem while they’re younger rather than when they discover they have a problem with fertility and they have waited until the last possible moment to see us. Even with in-vitro fertilization, it’s hard to get women pregnant after 42. It has a less than 10% success unless you use donor eggs.”

The risk of pregnancy complications increases with age, including fetal anomalies and genetic disorders — and not just because of the mother’s age. Berga said that the father’s advanced age — not just the mother’s — can cause a greater likelihood of chromosome conditions like trisomy 13 and trisomy 18.

According to the National Institutes of Health (NIH), most children with trisomy 13 die before their first month of life and survivors commonly experience lifelong disabilities and complications, including breathing issues, deafness, feeding problems, heart failure, seizures and vision problems. Those surviving infancy may also have intellectual disabilities and developmental delays and higher risk for cancer. The NIH describes trisomy 18 a chromosome disorder that can cause a hole in the heart, wasting syndrome, permanent flexion of the finger and cognitive impairment.

While some younger mothers experience complications and it is impossible to eliminate risk during pregnancy, it is helpful for any mother to take care of herself prior to and during pregnancy. Like Dreyer, Berga said that improving maternal health includes achieving a healthy weight before conception as well as managing any pre-existing conditions.

Berga also recommends healthy, lifelong habits for moms of any age, including avoiding tobacco use, alcohol consumption, contraindicated prescription and over-the-counter drugs and street drugs. Exercising regularly before pregnancy and as advised during pregnancy, along with taking prenatal vitamins support healthy pregnancy. Birth defects can occur even before a woman knows she is pregnant, so pre-conception care is vital.

While it is better to get healthy before pregnancy than to become pregnant unhealthy, lifelong poor health has already decreased a woman’s chances of a healthy pregnancy and fetal health; however, it is never a bad idea to improve health habits.

“If you think pregnancy is a high priority, plan accordingly,” Berga said. “We’re here helping, not making this a guarantee.”