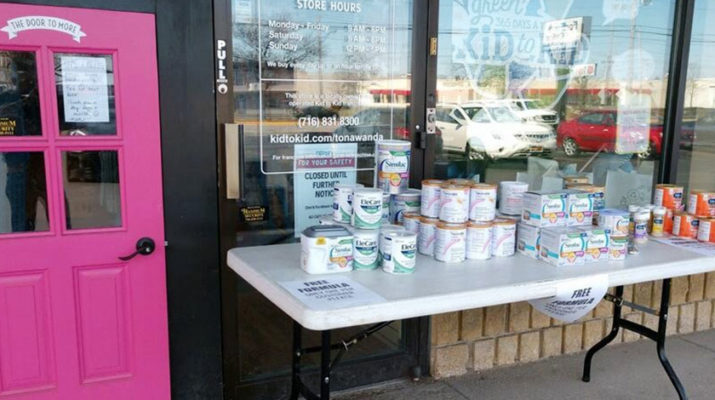 As anxiety around COVID-19 rises, Buffalo proves once again why it truly is the City of Good Neighbors.

Supply shortages are becoming commonplace, but that hasn’t stopped parents and small business owners from rising up to support a community in need.

West Seneca mom Krista Reid said being a parent changes your perspective on the coronavirus pandemic. She’s had difficulty finding wipes and diapers for her 8-month-old son, Warren. Beyond that, she lives in worry about keeping her son safe.

“I think my biggest concern is bringing the virus home to my little man. What would happen if he got it? The media says that children are one of the least affected, but I still don’t think my heart could handle it.”

To pass the time at home during this pandemic, Reid has been Facetiming her sister and trying to otherwise go about life as normal indoors.

She’s also making a conscious effort to help other moms, especially those who are struggling to find formula. Reid breastfeeds and has extra milk stored in her freezer. She offered to share her supply with anyone in her Facebook community.

“I just want to help. I can’t imagine how stressful it would be to try to find formula in this situation when so many places are sold out.”

While no one has taken Reid up on her offer yet, she plans to make a donation to Baby’s Sweet Beginnings, a breastfeeding and maternity boutique in Lancaster. The business is an official donation center for the New York Milk Bank, a nonprofit that “collects milk from carefully screened donors, pasteurizes it, and distributes to infants in New York State and the surrounding area,” according to its website.

Beyond that, Reid also delivered a few groceries and essentials to moms and their families before PAUSE went into effect.

Even small business owners are getting involved — just ask Kid to Kid Tonawanda. As an upscale resale store for children and infants, Kid to Kid has been a staple in Tonawanda for almost four years under the leadership of owners Michelle and Christopher Talley. When the pandemic first took hold, the Talleys took strides to sterilize the store and have all employees wear gloves during transactions. On March 17, they closed their storefront to keep their customers and employees healthy and safe.

Michelle Talley connected with several moms on Facebook and learned about the formula shortage through mom groups like Buffalo Mom Squad. Along with her husband, she decided to take action.

“Social distancing is very important,” she said. “We’re not going to have anyone in our store, so we thought, what else can we do to help while we’re here painting?”

So, the Talleys decided to donate approximately $3,000 worth of formula to the community. On March 21, the Kid to Kid Facebook page announced that it would leave a table of formula in front of the store on Saturday, March 21, and Sunday, March 22. People could stop by and grab a can while still practicing social distancing.

“People are going through tough times, and it means a lot that we could do something small,” Michelle Talley said.

Despite reservations that people might take advantage of an unmonitored table, Talley was happy to report that visitors respected the one-can guideline. To her surprise, the Facebook post even prompted additional donations from community members who wanted to aid the cause. Several people brought cans and left them on the table.

“This really is the City of Good Neighbors. People want to help.”

Parents and caregivers alike stopped by to grab a can and show their appreciation and gratitude. One father was able to get Neocate, a hypoallergenic formula that retails for around $50, while a grandmother was able to get a can for her daughter, a single mother faced with new financial hardships.

All remaining formula from the table is being donated to Clothe Me Co-op in Kenmore, a donation-based organization that aims to clothe people in need in Western New York. Anyone interested in donating essential items like toiletries and pantry foods can contact Becky Henderson at 757-573-8660.

Photo: Owners of Kid to Kid Tonawanda, Michelle and Christopher Talley, in March donated $3,000 worth of baby formula.