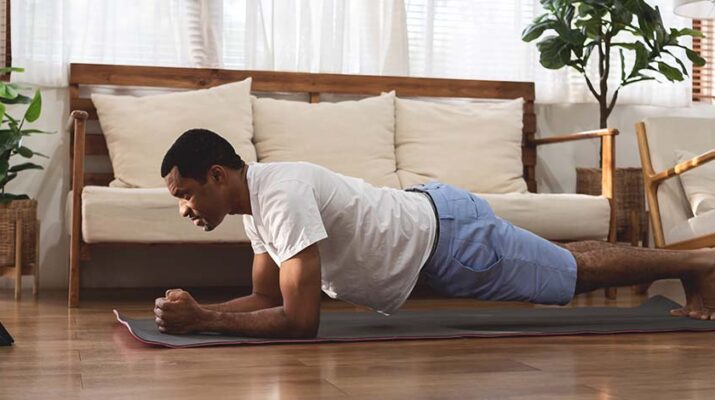 Wherever you are, you can likely perform planks

Beyond gaining enviable washboard abs, the benefits of planks include greater core stability, lower likelihood of back injuries and improved balance.

He advises clients to perform planks with the hips aligned, back straight and maintaining the natural curve of the lower back.

“Don’t ‘cheat’ by raising your hips up to put the weight on your arms,” Cook said. “Start with a standard plank and progress from there. Don’t try to conquer the world at the start. You’ll definitely hurt yourself.”

Joe Fox, personal trainer, certified functional strength training coach and owner of Train Smart, Buffalo, tells people of any athletic ability—from beginner to elite athlete—to not hold a plank position to the point of fatigue. Going longer can cause the person to switch to a passive, locked joint position that is more passive and not engaging muscles.

Instead of minutes-long planks, “you’re better off doing 10 to 15 seconds and not struggling. Choose quality over quantity. I love planks; they’re critical but don’t push fatigue,” he said.

The active plank engages the muscles to hold the position. The back should be straight with any style of plank (you know, like a plank). Perform several planks per session a few times per week. Apt recommends holding the position for 10 seconds and increasing the time by five seconds every week.

The classic plank is a little tougher, with the legs extended and all the body weight resting on the forearms and the balls of the feet. The body remains stationary.

There is also the straight arm plank, where the body is positioned like the classic plank, but the arms are straight, so the weight rests on the balls of the feet and the palms.

The oblique plank turns the plank on its side with the weight resting on one forearm and the side of one foot (the other is on top of it). As with all planks, the body remains straight. Eventually, the free arm is raised straight in the air to increase the difficulty.

In a similar vein, try tapping a target ahead of you or your own shoulder or raising your feet on a low stool while performing a straight arm plank.

Fox created the around the world plank. It begins in the classic plank position. The person sequentially lifts each hand and foot a little and holds each off the floor for a few seconds.

“The key is to keep the hips and shoulder level, lumbar spine neutral,” Fox said.

Talk with a healthcare professional before starting any new exercise program.