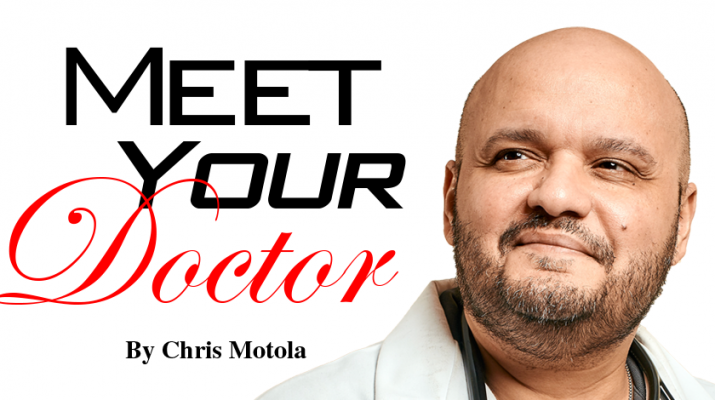 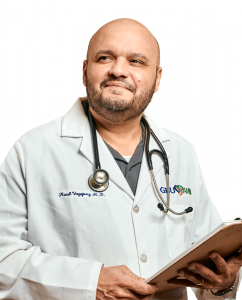 Q: We wanted to talk about your work with Medicaid patients over the years.

A: We run what’s called G-Health Enterprises. We created so many groups over the years that it started to almost sound like they were competing with each other, so we put them all under one umbrella, G Health Enterprises. I started out in 1996 opening a private family practice in the inner city, Urban Family Practice. During that time we did great work and, in 2003, built a facility. I’ve been trying to address the social aspects of health since 1996. Transportation, housing, food, those things often interfere with patient care. We built the facility in 2003 to have patients be able to get more services like urgent care, some surgeries, X-rays on site, things we hadn’t been able to do prior to that.

Q: How did you connect with other physicians?

A: From there I identified eight physicians who were kind of safety net physicians in the area and organized them around 2008, 2009. We formed an independent practice association, Buffalo United, and that practice association was a corporate platform under which we could work together. Whenever you have doctors working together on something, there are a lot of legal regulations that can get you into trouble.

Q: How did the Affordable Care Act (ACA) affect your organizations?

A: Along came the ACA and developed these dollars that would go to this idea called health homes. Nobody really knew what these health homes were at the time. They felt that if we were able to do case management of these individuals who were costing the state a lot of money, it would lead to a lot of improvement. We were selected as one of the initial 35 health homes in the state in 2012. The goal was to look at individuals with two or three chronic diseases, who often have substance abuse issues. They’re the 20 percent that accounts for 80 percent of the hospital costs. New York state has about 6 million people of Medicaid who are costing the state almost $60 billion a year. So we began the health home which became the Greater Buffalo United Accountable Healthcare Network (GBUAHN).

Q: I understand you took a slightly different approach than some of the other health homes.

A: So GBUAHN grew, and we developed a nice model oriented around primary care. A lot of the other health homes in the state tended to be more behavior-focused. In terms of size, we ended up being the largest health home in the state outside of New York City. The health homes, to be clear, aren’t locations, they’re a virtual model. So you’re providing these care coordination models in people’s homes or just helping them navigate through the systems. So a lot of this is happening out in the field. We were able to play around in that arena. It took us about a year to stabilize the population. ER visits climbed in that first year, but after that they dropped as we got our patients the help they needed and helped educate them and guide them through this system. We went to the National Committee of Quality Insurance to show them what we were doing differently. They were impressed with what we were doing and gave us the accreditation. We’re only ones in the state with that accreditation and one of only 45 in the country.

Q: How has it evolved from there?

A: So we evolved, care coordination was good, practices are good, informatics are good, but I knew that the long-term vision for this model was to become an accountable care organization (ACO). So back in 2016, we applied to become an ACO in New York state and became the first Medicaid commercial ACO. It gives you legal protection to form some structures with doctors, as long as you’re cutting costs, improving quality of care and patients are satisfied. Those are the three goals you have to meet.

Q: What kinds of protections does it offer?

A: Before this, if we had four or five doctors trying to do the right thing and tried to refer patients within their group and making sure the services got done, sometimes that service was over-utilized, especially in the Medicaid space. It kind of abused and killed the system. So Congressman [Peter] Stark came out with a ruling against that and made it illegal. But you can avoid that with an ACO, as long as you’re meeting those criteria. We’re a value-based organization not focused on volume of patients, but the quality of care. We partnered with an insurance company where we’re able to share data and look out for the best interests of the patients. It’s a true partnership, not just an insurance company deciding patient care. In our first year, last year, we ended up saving $571,000 that went back to the providers doing the work. All our organizations work together, though, they don’t compete against one another.

Q: Where do you plan to go from here?

A: We’re looking to develop, with the help of the insurance company, into a managed care franchise. The important thing is that doctors run this and own it. If you’re treating a patient, you have information about what that patient needs. If you’re an administrator just looking at costs … I like to say “the eyes can only see what the mind knows.” We got really good at patient management and getting a 360 view of patient care, finding out where over-utilization is, avoidable ER trips, pharmacy costs, super-utilizers. So we had a great platform for figuring out where the problems are.

A: You do want doctors to be able to focus on patient care, but I think eventually we can do both. Just knowing what drug alternatives are available saved us $7.2 million without having a negative effect on outcomes. I think people are more engaged when it’s their own skin in the game, and more interested in making things work. I used to run grocery stores. You sell milk at cost, you don’t make money on it, but it brings people into the store. It’s a loss leader. We’re not going to make money on everything that we do, but it’ll be beneficial to the business in the long run. Patient transportation is a big one we’re looking at now. Also housing for homeless individuals who are costing a lot money. How do we not just ignore these people, but engage in empathy, not just sympathy. The benefit will outweigh the investment.