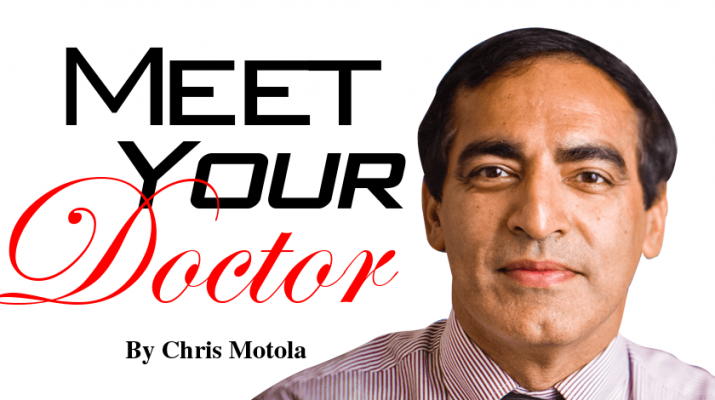 Q: We hear a lot about COPD (chronic pulmonary obstructive disease) nowadays, but I’m not sure most people really understand what it is. What is it exactly?

A: We used to use the terms “chronic bronchitis” and “emphysema” to describe types of it. Essentially, it’s the persistent obstruction of airflow structures. A substantial majority of it is caused by tobacco smoking, about 85% of it, at least in this country. It can be caused by other things like pollution and biomass smoke exposure, but those things are more common in other parts of the world.

Q: You’ve recently done some research that looked at the role of bacteria in the lungs and the relationship it is has to COPD symptoms.

A: We’ve been working on this for quite some time. Our contribution has been to understand how much of a role infection, especially bacterial infection, plays in COPD development. Patients with COPD have periodic episodes where it seems to get worse. So we have found that infections do contribute to these exacerbation episodes. They also contribute to the progression of the disease. The lungs are normally capable of keeping themselves, not quite sterile, but with fairly low concentrations of bacteria. But in patients who develop COPD, their local immune functions are compromised and they end up with chronic infections in their lungs. So that’s what our work has been, and there have been many offshoots of that research with clinical studies.

Q: What can be done once that chronic infection develops?

A: Right now, the one resource we really have is antibiotics, which is normally what we use on bacteria. We advocate appropriate use of antibiotics on these patients, because of course resistance becomes an issue. What we’re looking for more ideally is vaccine development. We are trying to develop vaccines for some of those bacteria. The other thing we’re trying to figure out is what are the mechanisms of the immune dysfunction. Why do these people become more susceptible to infections in the first place? If we figure that out, we may be able to correct it. In my opinion, this is the right approach. In the meantime, we have antibiotics, mostly to treat exacerbation. There has been some research indicating a potential use for chronic usage of antibiotics. That would be in people who have frequent exacerbations. It’s kind of a last resort. We do already have a pneumococcal vaccine, as well as the influenza vaccine, but we’d like to have other vaccines available as well.

Q: And just to be clear, the pneumococcal vaccine is for pneumonia, correct?

A: Yes, it’s the pneumonia vaccine. It’s very helpful, but it only deals with one of the bacteria that we’re concerned with. There are others that contribute to the disease, and we’d like to see vaccines for those as well.

Q: You’ve done some work with veterans. Are they generally more at risk for COPD?

A: Yes, but there’s also a higher rate of smoking among veterans, especially if you’re going back to the Vietnam and Korean War vets, so that’s from before we knew how bad smoking was. A lot of them got addicted to tobacco back during their time in the service.

A: Well, mainly smoking. There is some interesting stuff from the Gulf, Iraq and Afghanistan wars. A lot of those veterans were exposed to burn pits that these used to dispose of things at their posts. So it’s actually not so much COPD with those vets, but it presents with airflow obstruction, but it is related. Some of them present with closer to asthma symptoms. That’s something I haven’t really done research in, but I’ve dealt with it clinically. It’s not COPD, but it’s related to it.

Q: What other research are you currently involved in?

A: I do a lot of clinical studies in terms of new drug development. It’s not just lab-based research, it’s clinical as well. I used to only see patients at the VA, but I started seeing patients at outpatient clinics for UBMD, Buffalo General and Roswell. We do a lot of clinical research now with non-veterans at those locations. Most of the clinical research likes to focus on COPD, but we just launched an asthma study looking at another version of a drug that’s currently available. We also got funded to do something very interesting called “network biology.” So essentially in the past, when we were looking at the lung, we could only look at a handful of molecules at a time. Now with all these new techniques we can example multiple molecules or genes as the same time. So the question now is how do you analyze them? So this work it going to be done at the VA, UB and Rochester Regional. The person from Rochester does network biology research, so we’re going to share data from COPD patients, try to understand how all these molecules talk to each other and how it differs when they’re stable versus when they’re having an exacerbation.

Q: What’s been responsible for the increase in asthma rates?

A: If you look at COPD and asthma, the prevalence of COPD had been going up, but now it’s going down, and that’s because finally there is less smoking; the smokers there are do still often develop it, but there are fewer of them. Asthma is a whole different story. Asthma is generally not smoking related. There’s a lot of diagnostic confusion between the two; there’s a lot of overlap. But asthma may be allergic or non-allergic. Essentially, with asthma the prevalence went up and it’s not really clear why. One of the interesting hypotheses is that having too sterile environment during the first couple years of life may not actually be good for you and may actually encourage asthma development. It’s called the “hygiene hypothesis.” There are a lot of studies trying to understand why this happens, but we may have created too sterile an environment for infants. It’s almost as if the immune cells that should be dealing with pathogens end up with nothing to do and orient themselves toward normal environmental exposure. And there’s some good evidence that this may be what’s happening.

Position: Professor and chief, division of pulmonary, critical care and sleep medicine in the department of medicine, Jacobs School of Medicine and Biomedical Sciences at UB and a physician with UBMD Internal Medicine. He is a staff physician at VA Western New York

Family: Wife, one daughter, one son