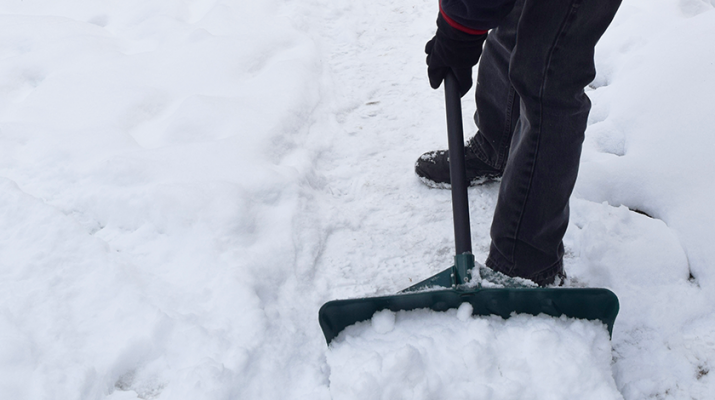 Shoveling can be potentially harmful if not done properly 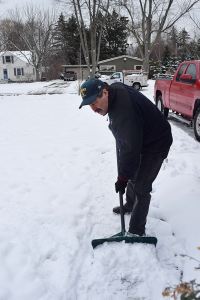 Shoveling is a reality of life for thousands of people around Western New York through many months of the year. Once the snow starts to fly, driveways and walkways must be cleared in order for daily life to go on.

While shoveling can be annoying, it can also be potentially harmful if not done properly.

Before you put on your boots and gloves, chiropractor Thomas Denecke, owner of Mineral Springs Chiropractic and Massage Therapy in West Seneca, said that it is important to stretch in order to avoid injury. He also says that individuals should take into consideration the physical strain of the task they are undertaking.

“Usually in the beginning of the season, it’s best to realize that you’re going to have to take your time and pace yourself,” he said. “It’s an activity that you haven’t done in a while and any time that you haven’t done something in a period of time, the initial time you do it, you’re likely to create some soreness or some irritation of the muscles.”

Kelly Rizzuto, a physical therapist and Buffalo native, said that when you do pick up the shovel, how you do so can be critical to avoiding injury.

“You have to think about your body mechanics, how you’re holding the shovel,” she said. “So not grabbing the end of it with both hands. Get one hand closer to the end of the shovel, creating a wider grip.”

Nearly everyone has heard the old adage, “Lift with your legs, not with your back,” and Rizzuto said that advice is important to follow.

“Lift with your legs rather than rounding your back and curling forward,” she said. “Think about squatting down and lifting with your legs and hinging through your waist and your hips.”

What you’re lifting also matters, according to Denecke. He suggests picking up smaller loads, particularly if it is wet, heavy snow, and not attempting to throw it too far.

“Pushing the snow is always an advantage as opposed to lifting and throwing,” he said. “Lighter loads are good. The biggest problem with shoveling is that it is a repetitive motion and without breaks, that’s going to create strain on the muscles.”

Rizzuto also noted that when you are tossing snow, it is best to turn your whole body and then dump it, rather than repetitively torqueing your back by twisting to fling the load.

Although the task may be a tedious one, both Rizzuto and Denecke stress that taking breaks can be an important part of the process.

“Listen to your body and take breaks, particularly if you haven’t done a lot of physical activity recently said Rizzuto.

And on those breaks, people should be sure to drink fluids, even if that doesn’t seem necessary.

“One thing a lot of people might not think about is being hydrated because you may sweat some, but not as much because it’s cold,” said Rizzuto. “People might not get the same type of thirst reflex, but you’re still exerting yourself.”

Once you have completed the task, avoid plopping down on the couch, even if the rest feels well-deserved.

“When you’re finished, you should go through a wind down or cool down period,” said Denecke.

And while it may seem natural to apply heat to sore muscles after a chilly task, Denecke said doing so could be potentially harmful.

“The problem with that is you’re going to usually create swelling and that’s a big mistake a lot of people make,” he said. “It does feel good when you put the heat on, however it’s likely to create more problems.”

Instead, the chiropractor suggests applying a cold compress to sore spots and pressure if your back is sore. Sitting with a rolled up towel or pillow in the small of your back can create the necessary force.

Both individuals say that some soreness for a day or two following a big shoveling job can be perfectly normal. Pain persisting past that time period, can be a sign of a bigger issue, however.

“Sometimes, with repetitive motion or if it’s a strenuous motion, you can create compression in the joints,” said Denecke.

If this is the case, the sooner a person has the issue addressed, the less atrophy of the surrounding tissue will occur and the easier the problem will be to fix.

Rizzuto also noted that while achy, sore or tight muscles are not unusual after such physical activity, throbbing, burning, tingling, sharp or stabbing sensations are not. Pain that radiates into one’s legs can also be a sign that something is wrong.

With the proper precautions, you can clear away the snow that the region is so well known for without any greater issue than the hassle of the task.