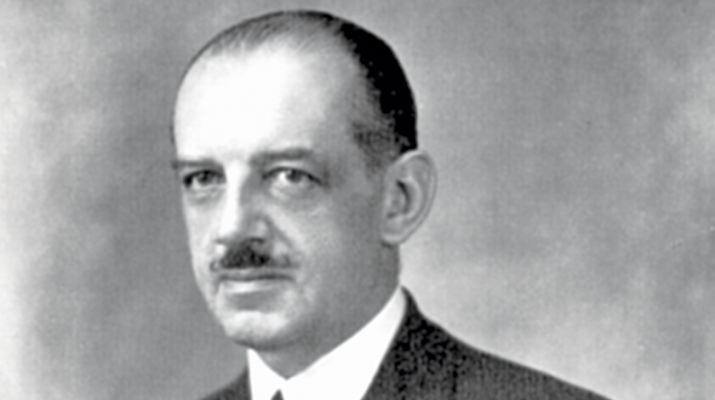 Born in Buffalo in 1886, John R. Oishei (pronounced Oh-shy) grew up the oldest of eight children in a tight-knit family, where he developed strong family values and a devotion to his Roman Catholic faith. He attended Central High School in Buffalo, but left before graduating to assist with his father’s successful law firm. Despite never having graduated from high school, Oishei went on to become one of Buffalo’s most successful businessmen.

A part-time job in a theater fueled what would become a lifelong love of the theater for the young Oishei. He rose to the ranks of assistant treasurer at the Star Theater, where he honed his business skills and became known as a dedicated and hard worker. He also learned the value of interacting with people, a skill that would contribute to his later success.

Oishei worked in the theater industry for such well-known names as Abraham Erlanger, the Schubert Brothers, Michael Shea and Peter Cornell, father of actress Katherine Cornell. He also wrote many plays, several of which were copyrighted.

Eventually, as much as he loved the theater, Oishei knew his destiny to be elsewhere, and he left to launch his career as a businessman, investing in an outdoor advertising company, Whitmier and Ferris, which eventually became part of Lamar Advertising.

In 1908, Oishei married Estelle Low. They had three children, but enjoyed just 30 years together before Estelle died unexpectedly of a heart attack. Oishei never remarried, instead devoting his life to his business interests.

An Accident Leads to an Innovation

While there are varied opinions as to whom actually invented the windshield wiper (most people believe it was Mary Anderson in 1908), there is no doubt that Buffalo-based Trico — and John R. Oishei — contributed significantly to the development and improvement of this vital vehicular accessory.
Oishei’s participation came after he was involved in a car accident in 1916.

As he was driving down Delaware Avenue in a rainstorm, his car struck a man riding a bicycle. Fortunately, the man was not seriously hurt, but the accident left a huge imprint on Oishei. He started thinking about ways to keep the windshield clear while driving in inclement weather. He contacted the inventor of a device known as the “rain rubber” — John W. Jepson — who agreed to work with Oishei. Oishei then asked his old friends, Dr. Cornell and William Haines, to invest in and assist with the Trico company.

As the automobile became more of a necessity than a luxury and as Buffalo emerged as an important city in the development of the auto industry, Oishei’s sharp business acumen and innate people skills helped grow Trico into a successful, worldwide company. Many credit Oishei’s success to his “ability to think at least two years ahead of his industry competition.”

At its peak in 1950, Trico employed nearly 4,600 at its three production facilities in Buffalo.

In 1967 — Trico’s 50th anniversary — Oishei set up the John R. Oishei Charitable Appreciation Trust as an expression of his gratitude to Buffalo for the opportunities it had afforded him and his deep appreciation to his employees, transferring nearly 81,000 shares of capital stock. Upon his death at age 82 in 1968, the value of the trust was nearly $13 million.

In 1999, the trust’s assets of more than $56 million were merged into The John R. Oishei Foundation.

“The goal of the foundation has always been to make a difference, rather than just write checks,” says foundation Executive Vice President Paul T. Hogan. “Mr. Oishei supported medical research, and he believed that education and medicine were the future of Buffalo. He would be thrilled to see this new hospital emerging, and that the foundation is part of that.”

“The historic and generous show of support by The John R. Oishei Foundation will secure access to specialized pediatric and women’s health services in our community for generations to come,” says senior PR specialist at Women & Children’s Hospital of Buffalo, Elizabeth Ortolani. “The new hospital will attract high-quality physicians, nurses and other medical providers, giving our patients and their families the best care by top providers, as well the latest in innovation and technology.”

Somewhere, the man whose name adorns this important new building in his beloved hometown is smiling.