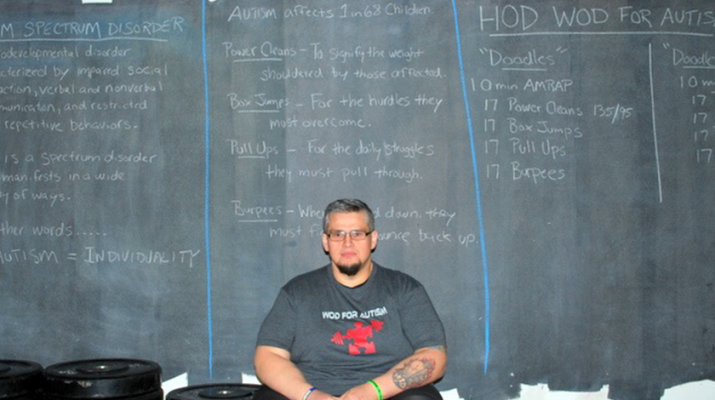 Dedicated fitness buff gives of himself to help daughter, others with autism

Many have come and launched fundraisers based around runs, walks and bike races. But for years Joseph Borgisi has been most into CrossFit.

He has now dropped hundreds of pounds and even landed work as  a personal trainer.

So when Borgisi wanted to raise money for The Summit Center — a Northtowns school for children with autism and other developmental disabilities, which he says has been with his daughter “every step of the way” — he decided on something a little different.

He organized a WOD (Workout of the Day) for Autism in April 2013 at a Lockport gym called House of Fitness, where he’d taken CrossFit classes for years.

The idea, he points out, is not totally original. In fact, CrossFit gyms are encouraged, and frequently do, hold fundraising events for local nonprofits.

“It was kind of a coincidence, because at CrossFit we do a lot of events like this,” Borgisi said.

Dozens of gym members and good Samaritans came out and hit the gym for the cause, raising thousands for The Summit Center.

But this year, with his WOD for Autism moving to Harborside CrossFit, 340 Seneca St., Borgisi expects a better turnout than ever on April 8.

“Even just from membership here we’ll probably end up with a lot more people,” Borgisi said.

In years past, his WOD for Autism has drawn dozens of novices, too, and Borgisi said CrossFit’s positive, communal atmosphere makes it a welcoming place for all. Workouts include combinations of weightlifting, gymnastics, running, and rowing — from dead lifts to hand-walking to front squats and running — and are always performed in classes, where everybody’s in it together and does their best to encourage each other.

Of course, there will be a workout group for those who need to take it a little easier.

“The workouts are scalable. We try to fit workouts to what people are familiar with,” Borgisi said. “We try to be as inclusive as possible.”

Borgisi himself realized that inclusivity when he started doing CrossFit himself in April of 2013, and weighed some 550 pounds. His fellow gym-goers made him feel welcome, and he progressed one WOD at a time.

In the years since, he’d shed more than 200 pounds, grown stronger and fitter, and even become a personal trainer himself, at The Biggest Loser resort in Java.

“I always felt included and that I was a part of something bigger,” he said. “For me, it’s just a fun way to bring together two things that I’m very passionate about.”

It’s clear to see why he’s passionate for both the event host and the beneficiary. Ever since his daughter, Maggie, was diagnosed with autism at 2 years old, he and his wife Julia have gone through plenty of challenges, as do millions of parents of children on the autism spectrum.

But, he says, The Summit Center has been there from the start, first offering in-house services of speech and occupational therapy.

Now that she’s 10, she goes to school daily at The Summit Academy in Getzville. There she attends structured classes led by special education teachers with applied behavior analysis-trained support staff. Instructors give her clear daily goals, and she has access to physical, speech and occupational therapy.

And perhaps most importantly, they offer Borgisi’s peace of mind.

“Her communication skills are lacking, so we worry constantly. But we can trust them,” he said.

The Summit Center also helps the family navigate through Medicaid waiver programs, and offers a respite program one evening a week and one Saturday a month, to give the parents a welcomed break.

“They really do everything for us. I can’t talk enough about the place,” Borgisi said. “They’re amazing. They’ve improved our lives for sure.

Workout of the Day, April 8

The WOD for Autism will be held from 9 a.m. to 1 p.m. April 8 at Harborside CrossFit, 340 Seneca St., Buffalo. Tickets are $15 in advance and $20 at the door. Participants can also buy raffle tickets for a Jack Eichel jersey.