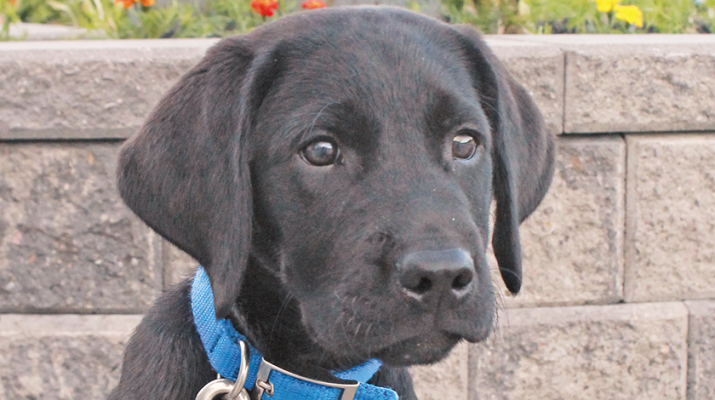 Guiding Eyes for the Blind, an organization that trains service animals, estimates that about 2 percent of people in the U.S. with visual impairment use guide dogs, amounting to about 10,000 guide dogs.

Most organizations don’t enforce many parameters about a puppy raiser’s age, occupation or marital status; however, a few traits help make a puppy raising experience successful.

Beverly Underwood, founder and president of Canine Helpers for the Handicapped, Inc. in Lockport, said that patience, time and, “ideally, previous dog experience” along with a caring environment represents traits of a good puppy raiser.

“Puppy raisers are the key to whether the puppy will be successful or not,” she added.

Her organization raises about 20 to 40 dogs annually, all of which are rescue animals, except for the occasional donation from breeders.

“A good candidate is someone who loves dogs and wants to make a difference in the life of an individual who’s visually impaired or has a special need in addition to being visually impaired,” said Mary Ellen Pratt, Erie County regional coordinator for Guiding Eyes for the Blind.

Without plenty of adult help, children likely cannot raise a puppy themselves, but many families enjoy raising guide dog candidates together.

Puppy raisers should have plenty of time to spend with a puppy. People who travel for work frequently to places where puppies can’t go, or spend numerous hours away from home may not be ideal puppy raisers. Retirees, at-home parents, small business owners, and those with accommodating workplaces possess the flexibility to tend to day-to-day puppy care, attend training meetings and take the puppy to plenty of places for socialization.

Puppy raisers must keep in mind the long-term goal for their new charge: placement as a guide dog. That means following the directions of the guide dog organization, such as teaching good manners, enforcing housebreaking and preparing to return the dog.

“The things a pet dog is allowed to do — we have to think beyond that,” Pratt said. “Close your eyes and imagine laying out your briefcase and shoes. If one was missing, a blind person would have a really hard time.”

At about 18 months of age, the dog is usually ready for further training as a guide dog if it passes muster.

Depending upon the organization, dogs that don’t “pass” guide dog training may be passed along to a different branch of their organization or to a different service organization for another type of service. Some return the animals first to the puppy raiser for optional adoption, and, if refused, to another good home.

Guide dog training organizations source dogs through breeding, rescue and/or donation. The animals are expected to learn good manners and balance obedience with the moxie to contradict their handlers if that’s what it takes to guide them away from danger.

Linda Damato, director of the puppy program for Guiding Eyes for the Blind in Yorktown Heights, NY, said that the organization has about 440 puppies in foster homes. Guiding Eyes serves the area from Ohio eastward and from Maine to North Carolina.

Though it’s a lot of work to socialize and care for a puppy, she said that “most of the puppy raisers say when they hand in the dog that they get out of it more than they give. There’s a connection with the community they build.”

She and her husband, Jamie, and their three daughters attended weekly lessons to learn how to work with the puppy.

“It’s a very emotional time when you hand over the dog, but it’s bigger than that,” Fox said.

Understanding the difference a dog makes in the life of its recipient helps tremendously.

Fox’s flexible schedule has made puppy raising easier to fit into her life.

“It’s a great commitment,” Fox said. “You have to incorporate this puppy into your life, not just as a hobby you can stop or start.”

Cindy White, a retiree in Buffalo, has raised puppies for Canine Helpers for about 10 years.

“I like working with dogs and give them basic obedience for when they’re in public,” White said.

It’s important for puppy raisers to only train within the parameters of the organization to avoid confusion later. She takes her charges everywhere she can to expose them to innumerable sights, sounds and smells.

“What’s most important is to help them become well-balanced dogs, since you won’t know where they will go,” White said.