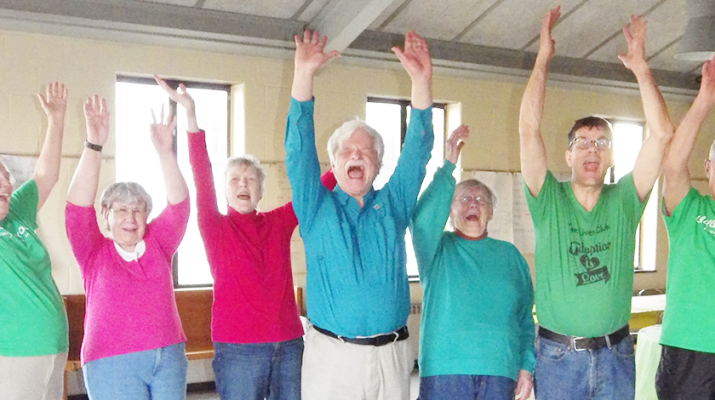 People of all ages and abilities gather weekly at Cleveland Hill Methodist Church in Buffalo to do mainly one thing: laugh. They are members of Many Ha Ha’s Laughter Yoga Club

They say that laughter is the best medicine. The expression is used time and again to explain the uplifting feeling you get after a good laugh, the implication being that it can take away your ailments (if only for a moment). It’s a great excuse to crack a joke, no matter how ridiculous or corny.

But it’s more than just an excuse. Research around the world has proven that there are numerous health benefits of laughter.

A study conducted at Loma Linda University in California, for example, found that laughter can boost memory retention in elderly adults. Likewise, a study at the University of Maryland found that a sense of humor can decrease one’s risk of heart problems. Not to mention, a hearty laugh can put your abs to work and help you feel more relaxed.

As adults, it’s not always easy to exercise our funny bones. Responsibilities and daily stressors can inhibit our ability to find humor in situations, and it can be difficult to laugh when you’re not inspired.

Dawn Werner, a Snyder resident and the founder of the Many Ha Ha’s Laughter Yoga Club in Buffalo, estimates that children laugh up to 300 times per day, while adults are lucky to briefly laugh 15 or 20 times per day.

“I enjoy being silly, and like all of us here [at the Many Ha Ha’s Laughter Yoga Club], I’ve been laughing since I was born. I’m always amazed at how infrequently adults laugh — if you look at statistics — because Dawn and I laugh every day.”

That’s where laughter yoga comes in. Laughter yoga is a workout developed by Madan Kataria, a medical doctor in Mumbai. According to his website, laughter yoga operates on the premise that your body cannot differentiate between fake and real laughter; the health benefits are the same either way. Kataria set out to prove this, and through the years laughter yoga has spread to more than 100 countries and made its way to Buffalo.

The Many Ha Ha’s Laughter Yoga Club meets weekly from September through June at Cleveland Hill Methodist Church in Buffalo. People of all ages and abilities gather together to perform various exercises that promote laughter. Attendees will recognize the church by an appropriate sign out front that says: We need not think alike to love alike. In the Werners’ case, we need not think alike to laugh alike.

Inside, the group gathers promptly at 6:30 inside an old cafeteria-style room. Chairs form a semicircle outside the group — accommodations in case anyone needs to sit during the session. Over the course of the next hour, participants walk through a series of scenes and scenarios that involve acting and a lot of laughter. One example is the Tootise Tot, where everyone collectively sings the song and dances along to the rhythm. Another example involves zooming around pretending to be “bumper cars” while chuckling continuously.

Evelyn Mietlowski, an Amherst resident and clown with Buffalo Clown Alley, said that when she leaves a session, she feels uplifted and invigorated.

“I just love the way you feel when you’re done. It’s just a wonderful experience. The world needs more laughter.”

Like Dawn Werner who became a certified laughter yoga instructor 11 years ago, Mietlowski is now on the path to becoming certified. While Werner obtained her certification in Miami Beach where she studied under Kataria, Mietlowski will be learning the 100 or more techniques on her own time. From there, she plans to spread the joy to others, especially at the sites where she volunteers, such as Brompton Heights, an assisted care facility.

“We’re trying to boost the laughter quotient for the day. After you’re done with a laughter yoga session, people usually feel energized and their spirits are buoyed. It doesn’t matter if you just give a smile or if you’re rolling down on the floor because you’re laughing so hard,” Werner said.

While some of the techniques might take people out of their comfort zone, Werner added that this is an important part of getting to the heart of the practice. While forcing laughter, people often find that they’re actually laughing.

Don Dehoff, a resident of Snyder, a retired book binder, and a fellow laughter yoga instructor, said that he’s motivated to teach by his passion for helping others. In one instance, he was teaching a class in Buffalo to disabled people. Someone saw him performing the exercises and asked, “Don’t you feel silly doing that?” His response was simple: “Not as long as I can make you laugh.”

Dehoff and the Werners offer classes throughout the Buffalo area at locations like the Independent Health Branch of the YMCA in Williamsville, Cheektowaga Town Park, and occasionally Canalside.

Laughter yoga sessions returned to Cleveland Hill Methodist Church in September, and anyone interested can visit The Many Ha Ha’s Laughter Yoga Club website at http://yogalaugh33.wixsite.com/manyhaha/.