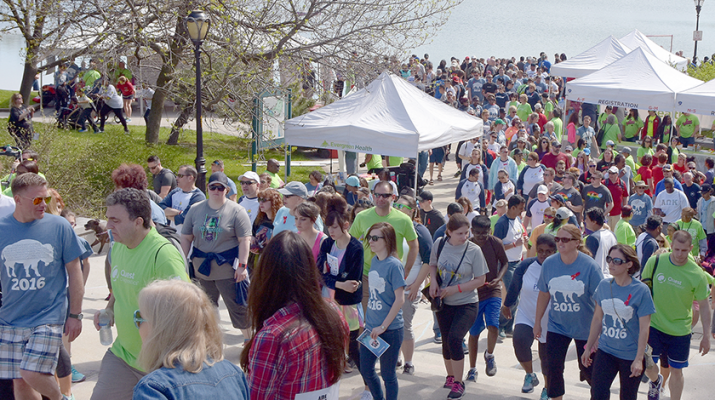 We have come a long way since Evergreen Health held its first-ever AIDS Walk in Buffalo in 1992. At the time, the HIV/AIDS epidemic was at its height. More than 70,000 Americans were being diagnosed with the immunodeficiency virus every year, and more than 40,000 were dying in a given year, according to the U.S. Centers for Disease Control and Prevention (CDC).

In the quarter-century since, rates of HIV/AIDS diagnosis have dropped by more than half. And more significantly, treatment has improved vastly. While nearly 40,000 are diagnosed with HIV/AIDS a year in the U.S., only 6,721 people died from the diseases in 2014, according to the CDC.

But with that progress has come an unintended, if predictable, side-effect — the diseases receive much less attention, as public concerns turn to more recent public health crises, such as opioid addiction or Ebola.

“An HIV diagnosis is no longer the death sentence it used to be,” said Rob Baird, director of fundraising and events for Evergreen Health. “But it’s something we need to keep talking about.”

Baird said that while attitudes toward AIDS and LGBT populations have improved greatly over the past two and a half decades, there is still a strong stigma attached to the disease. He hopes that with more conversation and advocacy, they can chip away at those prejudicial attitudes.

“Back then there was a lot of fear, a lot of misinformation. There’s still a lot of stigma,” said Baird, adding that many HIV/AIDS patients are afraid to disclose their diagnosis even to their doctors.

“I think there has been a lot of progress, but we still have a long way to go,” he added.

For the AIDS Walk, which is set for 9 a.m., May 6, Baird and other organizers are hoping to bring out more than 600 walkers and raise at least $90,000. Last year Evergreen saw similar attendance and raised $100,000; so the goal is to beat last year’s numbers.

That funding will go toward Evergreen Health’s efforts to eradicate HIV/AIDS in the Buffalo and Western New York.

A nonprofit, multi-agency service group, Evergreen Health prides itself on its open and inclusive attitudes. Many of their patients — particularly those with HIV/AIDS — have issues with poverty, addiction and homelessness, and Evergreen makes efforts to let these populations know that they will be welcomed there.

They offer free-HIV/AIDS testing, a harm reduction center with a clean-needle exchange, a wellness center where patients can talk openly of their struggles with disease or social isolation, and care coordination, to help connect impoverished patients with doctors, health care and social services.

“While this isn’t typical of people with HIV, a lot of our clients have other issues, [such as] homelessness or addiction,” Baird said.

“We try and do a holistic approach to healthcare,” Baird said.

For the AIDS Walk, participants walk five kilometers and end at Hoyt Lake. Music will provided by the Buffalo Gay Men’s Chorus, and the event will be capped with a moment of remembrance for those who have died from HIV/AIDS.

Baird said many of the walkers are themselves battling HIV/AIDS, and many have lost loved ones to the disease.

“It’s really a special moment in the day. All the craziness stops and everybody takes a moment to reflect,” he said. “There’s quite a few people for whom the walk is a very personal experience.”

For more information about the AIDS Walk, search for “AIDS Walk Buffalo 2017” on Facebook. To learn more about Evergreen Health, visit www.evergreenhs.org.