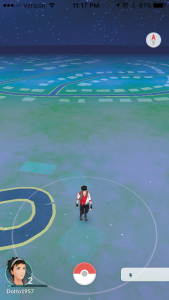 Remember the “crackberry addicts” with their noses buried in the cell phone screens, oblivious to the world around them?

Pokemon GO is the latest example of cell phone distraction.

With a near-addictive quality, the game has swept the nation and captured the attention of game enthusiasts of all ages. While its blending gaming with real life recreation helps foster more social interaction among gamers and necessitates physical activity to participate, Pokemon GO bears some risks as well.

Distracted walking and driving provide an obvious example as gamers are too busy watching their screen to watch where they’re going.

Elizabeth Carey, public affairs manager for AAA Western and Central New York, said that her organization took the growing phenomenon so seriously that they issued a press release about Pokemon GO after the game became available.

“It gets people up and off the couch and that’s fun, but you should never try to play behind the wheel,” Carey said.

She personally witnessed someone apparently trying to play the game while driving who nearly hit her vehicle.

Carey also cautions pedestrians to keep their eyes on the real world to avoid walking into traffic.

“Gamers are vulnerable while playing the game,” Carey said. “Pay attention to your surroundings. Always pay attention, whether in a busy place or an isolated place.”

The National Highway Traffic Safety Administration attributes 3,000 annual deaths in the US to distracted driving, which includes cell phone use of any kind.

“If you look away two seconds, you double your crash risk,” Carey said.

The NHTSA also states that when driving 55 miles per hour a person not looking at the road travels the length of a football field as if blindfolded. They say that distraction plays a role in nearly 6 out of 10 moderate-to-severe teen crashes.

Sam Dalfonso, president and driving instructor at Buffalo Driving Schools, Inc. in Buffalo, said that even at lower speeds, cars cover much more ground than many people realize. He uses a formula of dividing the car’s speed, then adding the answer to the original number. For instance, for a car traveling 40 mph, divide that by 2 to get 20. Add the 40 to 20 and you get 60. That’s nearly how many feet per second your car travels.

Most people look at their phones for at least five seconds to check them.

“You’ve driven almost 300 feet without knowing where you’re going,” Dalfonso said. “A lot of changes can happen in that time span.”

Drivers should put their phones away while behind the wheel.

Malachi Fisher, coordinator of trauma injury prevention and educational outreach for Women & Children’s Hospital of Buffalo, hasn’t treated any patients because of a Pokemon GO incident, but said he has heard of mishaps.

“You have to keep your head up,” he said. “With this game, the Pokemon are all in congested spots. You’ll have a group of people looking down at their phones and not paying attention.”

Pedestrians should watch both for immediate peril, such as that signpost or curb, and the possibility of danger, such as traveling through an unfamiliar neighborhood.

Some players wander off and get lost while wrapped up in a game. While GPS could ordinarily guide you home, the game is hard on battery life since employs GPS to function. You may realize you’re lost just as your battery dies. Instead, keep tabs on your phone’s power supply or use a portable charger.

In the thrill of finding a Pokemon, don’t stray from public property.

“Sometimes, it lists places where you shouldn’t go,” Fisher said. “There have been trespassing complaints. Don’t go on private property.”

Especially at night, a homeowner may not understand your intentions and could think you’re a prowler. Don’t assume other players want to meet you. Though you both may share enjoyment of the game, approach carefully.