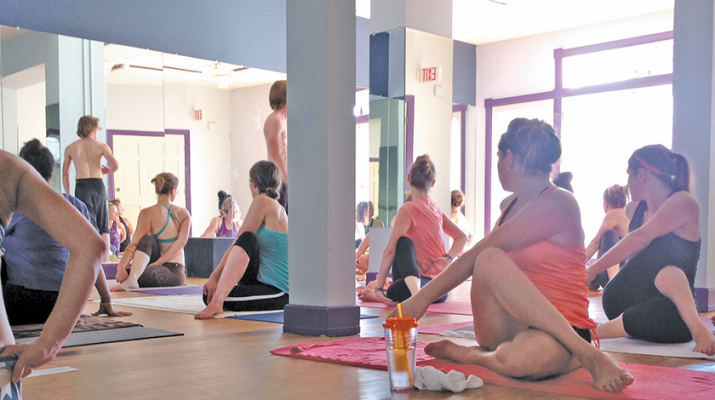 Hot yoga class at of Evolation Yoga Buffalo. The classes typically involve 26 poses and two breathing exercises, performed over the span of 90 minutes in a room heated to 90 or 105 degrees.

Dave Drost is the owner of Evolation Yoga Buffalo.

Unlike traditional yoga, Bikram yoga takes place in heated rooms where temperature can reach up to 105 degrees

Though us northerners claim to love a warm summer, the truth is we generally avoid heat like the plague. We fill our windows with box fans and air conditioners; we install pools in our backyards to have a place to cool off; we crack the car windows and bemoan the time it takes for the car AC to kick in.

But David Drost, owner of Evolation Yoga Buffalo, says that in the right conditions, there are benefits to facing the heat. And it seems more people are starting to agree.

The classes typically involve 26 poses and two breathing exercises, performed over the span of 90 minutes in a room that is heated to 90 or 105 degrees.

Drost, who was the first in the Buffalo area to offer hot yoga, says that the practice has two main benefits over traditional (room temperature) Hatha yoga.

“Most people in our culture these days tend to frown upon perspiration. Without proper perspiration, the human animal gets very ill,” Drost said. “It fosters that cleansing of the body.”

The second benefit, he says, is that it encourages people to breathe deeply during periods of intense heat. He pointed out that people tend to slouch and breathe shallowly when it’s hot out.

“That’s what my body needs me to do,” Drost said. “It forces us, challenges us to breathe deeply, and find a way to use our body to its maximum capacity.”

Bikram yoga, a style that is so popular that it’s become synonymous with hot yoga, was founded by yoga teacher Bikram Choudhury in the ‘70s.