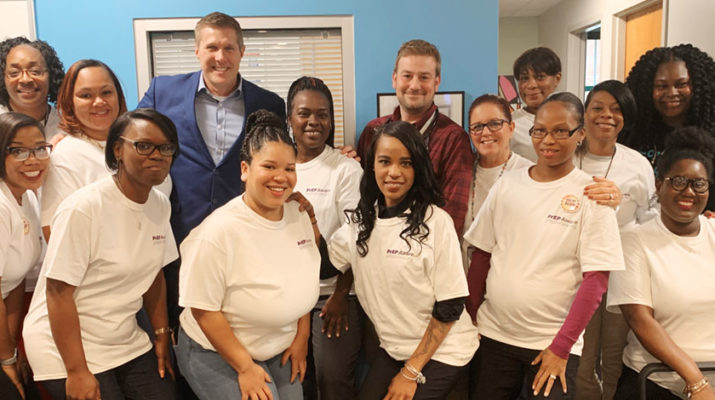 Since the early days of the AIDS epidemic in 1981, Evergreen Health has been part of the fight against the infection’s spread.

Matt Crehan Higgins is the associate vice president of enhanced medical services at Evergreen Health. He said that Evergreen has made great headway in recent years.

“We have forward thinking about adopting best practice,” Higgins said. “By being innovative and culturally aware, we’ve established ourselves as the regional leader where people can come to get every service or if they’re at risk, learn how to reduce their risk.”

Since 2014, New York state has promoted End the HIV Epidemic by 2020 (EtE2020). Though there are a number of other similar initiatives going in the US, New York state’s was the first EtE2020 initiative.

The US and the World Health organizations’ initiatives are very similar, except a target year of 2030 to achieve their goals.

Evergreen offers HIV positive patients a test that can measure the level of viral load within the blood. If it’s below a certain level — thanks to medication suppressing the virus — the patient cannot sexually transmit the virus to anyone else.

The other emphasis is preventive medicine, pre-exposure HIV prophylaxis (PrEP). Taken daily, pill can prevent infection among HIV negative people who may be at risk for HIV. According to Evergreen’s website, this includes people who have had more than one sex partner, have had sex without a condom, are in an ongoing relationship with someone who has HIV, are not sure of the sex partner’s HIV status, are men who have sex with men, are transgender people who have sex with men, have been diagnosed with an STI/STD in the past six months and have injected drugs and shared needles, among other indicators.

“We’ve seen a major expansion in that over the past few years,” Higgins said.

Three years ago, only 200 took PrEP. At last count, that has increased to more than 700.

“We have increased community awareness through medical providers, social groups in the region and college campuses to make sure they’re aware of what’s available and make sure they’re tested and get into treatment,” Higgins said.

To break down stigma about HIV, he likes to say, “’We all have a HIV status, whether known positive, negative and on PrEP, negative and unaware.’

“We want them to work toward achieving positive outcomes,” he added.

The success of patient compliance with taking PrEP is especially notable since many in the population taking it have one or more risk factors — multiple sexual partners and lack of condom use — yet they consistently remember to take a pill every day to make PrEP effective.

“People who use drugs are actually good at taking medication,” Higgins said. “We never tell people how to live their lives but tell them every way they can live their lives and let them make their own choice about perception of risk.

“The population we serve are capable on their own, often far more than the medical community gives them credit for. When people come and say they’re not condom users, that’s OK. We want to know about it and we’re aware the paradigm has shifted.”

PrEP and the patients receiving medication to suppress their viral load are encouraged to visit the office every three months to discuss how they’re doing and to receive further information about their health.

The office staff also helps patients overcome any obstacles to taking their prescriptions. Evergreen has a team of prevention navigators who work with patients to take down their sexual histories, talk about education, and give them information.

Evergreen’s operating budget of $80.1 million comes from grants and patient billing. The organization works to get all its patients on health insurance so Evergreen can bill for services as needed or allowed. Evergreen employs 414 agency-wide.

“We’ll continue to work to reduce stigma in the community and testing and getting into care are the keys to ending the epidemic,” Higgins said.

Photo: Members of the Evergreen Health peer group help spreading the word that medication is available to reduce the risk of contracting HIV.