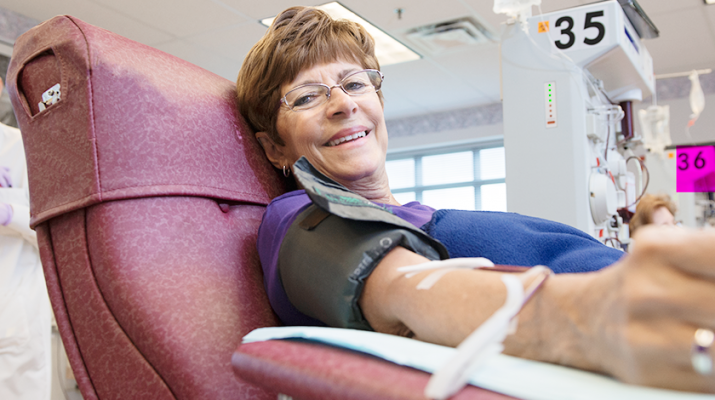 Blood plasma donation is a process that helps save lives. It is considered a selfless effort that can improve the health of newborns while helping the families of those babies avoid the hardship of a devastating loss of life.

As part of an ongoing promotion to bring awareness of human blood plasma collection and the importance of plasma donation, employees from local blood laboratories and donation centers are working to educate the general public about how they play an important role in saving lives on a regular basis.

Transforming donated plasma into substances that are later used to prevent life-threatening diseases in newborns and producing lifesaving therapies for treatment of liver disease, rabies, tetanus and hemophilia is a detailed process known as plasmapheresis. It is estimated that the lives of approximately 36 babies are saved with each plasma donation, meaning any donor’s sacrifice of their time results in the production of substances that improve and save lives.

“Donors of blood plasma provide a truly unique and special gift that can help newborns survive and contribute to the avoidance of death or serious illness of the child, something the mother and the rest of the family are forever grateful for,” said Chad Barker, center director at KED Plasma Somerset Labs, Inc. KED is a Williamsville-based outfit that specializes in the collection and procurement of high-quality plasma that is processed into plasma-based therapies. “Knowing that you have the potential to save as many as 40 lives in just one hour by being part of a powerful life-saving program is a tremendous benefit,” Barker added.

The plasmapheresis donation process takes longer — approximately one hour — than donating whole blood. Because plasma is replenished in the body much more quickly than blood cells, plasma donors can donate as often as twice a week, while whole blood donors must wait for two months before donating again. What makes plasma so important is that it transports antibodies, clotting proteins, hormones, and enzymes while carrying nutrients to the body’s cells. It also removes waste products from the body’s cells and helps to maintain blood pressure.

“The donation of plasma is very important because it is so vital to life and cannot be produced artificially,” said Patty Corvaia, external communications manager for the NY-Penn Blood Services Region of the American Red Cross. “You are giving someone a life-saving substance. That means you are helping to save lives; there is no other way of saying that is what it comes down to. It is so important. Plasma donors are special people who are compassionate human beings who have a desire to help others, which in many cases means assisting absolute strangers. It’s an incredibly generous donation by a healthy person to supply plasma to eventually be used by others who are in great need.”

While most people know about donating whole blood, a procedure that takes anywhere from 10 to 15 minutes, donating plasma is more time consuming, which is why Somerset Labs, Inc. provides monetary compensation for each donation. The American Red Cross regularly provides incentives in the form of gift cards and other “thank you” items often supplied by corporate partners.

Western New York residents are encouraged to contact either entity to learn about the steps involved in becoming a new donor, a process that includes a free physical exam by a physician and a series of immunization injections of red blood cells.

Todd Cleckley, a Tonawanda resident who works as a plasmapheresis nurse at KED, remains inspired by the generous Western New York residents and Canadian citizens who frequent the facility in Williamsville to donate plasma.

“This is my first nursing job and is a second career for me,” said Cleckley. “I come into work every single day knowing that I literally play a role in saving the lives of babies. It is an honor to work with each donor because they make an inspiring commitment to participate in a process that improves and saves lives.

“It is an extremely safe and easy process that takes place in a facility that is regularly inspected and audited. We are committed to our work, which is a labor of love for each of us that has an end result of great joy and happiness for the family of an ill child.”

With the summer months upon us, the need for plasma donation is great during this time of year.

“Summertime has consistently proven to be quite challenging because school is out of session and some of our regular donors are off on vacation or traveling and that can cause a reduction in our collection efforts. So anyone who is thinking about learning how to become a new donor is encouraged to reach out and find out if they meet the requirements to donate plasma,” said Corvaia.

“You often hear about Buffalo being ‘the city of good neighbors’ and with this type of donation we regularly witness that as a real-life scenario through the blood plasma donation process,” said Barker.

Cleckley believes anyone looking to make a difference in the lives of others should explore the opportunity to become a plasma donor.

“There aren’t many volunteer opportunities that can provide an immediate positive impact in the lives of babies from across the globe,” said Cleckley. “Give it some serious thought. A baby’s life depends on it.”

Plasma is collected using a process called plasmapheresis.  Whole blood is drawn utilizing a machine that removes whole blood, mixes it with an anticoagulant solution, separates the plasma and then returns the remaining components back to the donor.

Yes. A sterile, single-use kit is used by professionally trained staff. Because the body can replace plasma much more quickly than it can these other components, plasma donors may donate more frequently than whole blood donors. After your donation, your body replenishes the donated plasma within one to two days.

To be eligible to participate, donors must:
• Have Rh negative blood
• Be at least 18 years old
• Weigh at least 110 pounds
• Be in good general health, which includes taking a physical
• Provide a valid and current government issued photo ID
• Provide proof of residency and a Social Security Card

4) What happens to the plasma after donation?

After collection, your plasma is frozen and stored there until all test results are returned indicating that your plasma is safe for further processing. The plasma is eventually separated into its various components that are processed to create plasma-derived therapies, which are distributed worldwide for people suffering from serious and rare conditions like hemophilia and immune deficiency disorders.

5) How do you learn about becoming a donor?