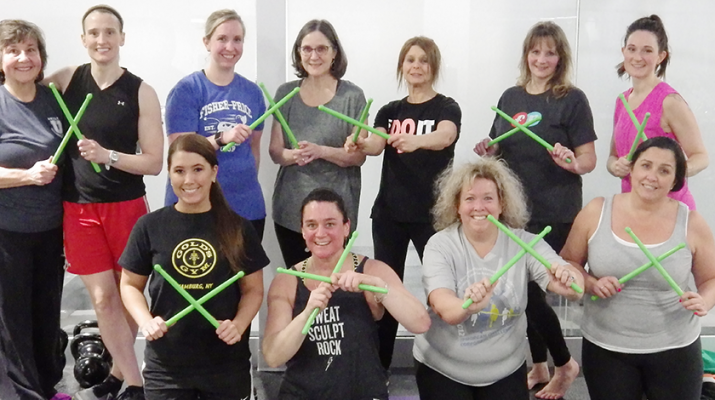 New workout trend is catching on fast in Western New York; area has already more than a dozen registered instructors

April Woolley raises two lime green Ripstix above her head and begins to tap. She tucks her shoulders behind her, straightens her back and reminds the room of approximately 12 people to do the same.

Yoga mats line the floors and mirrors cover the back and side wall. The music starts to take off, and Woolley moves with it, drumming along to the rhythm and taking everyone along for the ride.

As she leads, they follow, pounding the floor and air in rapid succession — everyone’s a rock star in their own right. The beat rises and so does their pulse.

“There are no mistakes; there are only drum solos” says Woolley as she kicked off Woolley’s Tuesday night POUND class at the Fisher-Price Fitness Place in East Aurora.

By day, Woolley works as the high school band director for Pioneer Central School; by night, she inspires people of all ages to connect to fitness through music.

As a certified POUND Pro, Woolley’s goal is to make people forget that they’re working out, and she believes that creating rhythm is the best way to do that. The drum-style workout also has the added bonus of playing into Woolley’s love for making music.

“When you have a bad day and you can hit the floor as hard as you can, it’s an emotional release … when people can connect to the beat, that’s when the magic happens.”

Two drummers and former college athletes discovered that magic in 2011 when they had to stand during one of their performances. They spent the night without a stool, squatting over their drum kits, only to realize the next morning that they’d gotten a great workout. Seven years later, this revelation has turned into a nationwide trend, and the world’s taking notice — especially in Buffalo.

There are more than a dozen registered POUND instructors in Western New York, and classes are popping up in more than 50 countries worldwide, according to the POUND Fit website. Venues all over Western New York, from rSpace in Colden to Brierwood Training & Wellness Center in Hamburg to World Gym in Tonawanda, have picked up on the trend and integrated POUND into their regular fitness schedules.

Jill Gregory, a safety engineer at Harlan Electric Company and a Concord resident, first learned about POUND from a sign she saw while walking her dog in 2015. Later that night, she found herself at the community center in her town, gripping Ripstix and following Woolley’s lead.

One class was all it took — and Gregory was hooked. She has always been a self-proclaimed fitness buff with five sprint triathlons under her belt. Coordination and dance moves never came easily for her, though, and she never got into trends like Zumba. But POUND was different for her. Unlike Zumba, POUND is rhythmically driven and less focused on dance steps, she said, and because of this, the class quickly became a passion.

“You’re making noise, you’re making movement, and burning calories. Instead of fumbling to remember the moves, you still can make noise and have fun and burn calories all at the same time.”

Gregory decided to take her passion one step further by becoming a certified POUND Pro in 2016. After an eight-hour course at Queen City Cycling in Buffalo, Gregory started teaching at Glistening Sky Fitness & Wellness in Delevan. Now, she teaches at rSpace on Saturdays, and she makes sure she doesn’t miss a day.

People of all ages and abilities attend her class, from young children to participants in their 70s. The routines allow each person to modify the moves to meet their abilities. Gregory also likes to remind her students that “halfway is OK,” meaning you don’t always have to pound at ground level.

A typical POUND routine incorporates approximately 70 moves and can burn up to 900 calories, according to the POUND Fit website. The movements target the whole body and include a mix of cardio, conditioning, strength training, yoga and Pilates. Despite the rigorous workout, the class focuses on the music and rhythm as a distraction technique to make you forget you’re working out.

For anyone considering their first class, Gregory has two pieces of advice. First, don’t be afraid to modify the moves. Second, laugh about it and have fun.

“When I would be completely off beat, April would be on target, on the beat. I would be beating to my own drummer. Just laugh about it, and know you’ll get it eventually. Have fun until you do.”

To find a class near you, visit: https://poundfit.com/find-a-class/