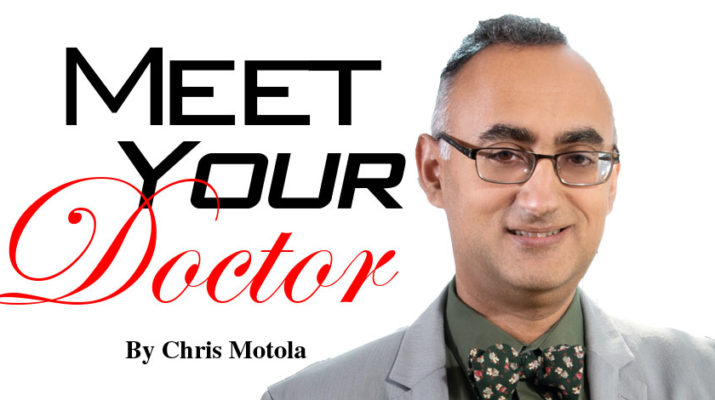 All about deprescribing: UBMD Family Medicine physician is part of Team Alice, a group that’s working to reduce the number of pill patients take

A: Team Alice is a research group at the University at Buffalo with faculty from different departments. We have myself and others from the department of family, people from the school of pharmacy and pharmaceutical sciences, people from the department of industrial engineering, as well as experts from other fields. We’ve been working together for the last few years trying to address this problem of older adults taking medications that might do them more harm than good. We got started because of the case of Alice Brennan, who was brought to our attention by her daughter, Mary Brennan-Taylor, a patient advocate and a member of Team Alice. Alice was a lady in her 80s living independently in the community who went to the emergency department because of pain in her neck and was prescribed something called cyclobenzaprine, which is a muscle relaxer. It can be safe for younger people, but for people her age it’s generally known to be unsafe. It still gets prescribed anyway. She didn’t take it right away, but it ended up coming back onto her list when she was hospitalized and she was given it for several days. She started becoming very confused and having hallucinations, not eating, getting sicker and sicker. She eventually got multiple infections in the hospital and died. We take inspiration from the need to do something about future Alices. We know it’s a complex problem and that people get prescribed medications for different reasons without the provider or prescriber being necessarily being aware of the risks.

Q: It sounds there are two parts to the issue: initially prescribing appropriate medications and deprescribing ones that are no longer appropriate.

A: Yeah, sometimes people get prescribed a medication that might be appropriate when they’re younger but as they get older someone needs to say it’s not safe anymore or maybe they don’t need it anymore or maybe they still have the problem it was meant to address but we need to try something safer instead. That’s one scenario. The other is that maybe you should never have been prescribed it in the first place.

Q: What opportunities are there to intervene before there’s a crisis?

A: I think every elderly patient should get their medications reviewed every year by their primary physician. We’d also recommend doing it anytime there’s a change in their condition. So if a person is hospitalized, that’s a great opportunity to review their medications. Or if they have a change in their mental status, if they’re experiencing mental fog, fatigue. It’s a difficult thing to fit into a physician’s busy schedule, so one of the things we’re looking to do is incorporate a pharmacist into primary care offices. We have to figure out how best to utilize the pharmacist’s expertise. And the last piece is addressing challenges in sharing information between offices. You might get the medication taken off one office’s list, but it’s still on a hospital’s list, so a medication that’s been stopped might  be restarted. It’s especially dangerous in hospitals where a patient may not be in the condition to realize what they’re taking. That can lead to problems. We’re working with HEALTHeLINK to coordinate information between offices, so if a patient shows up in one hospital and then a week later in another, the second hospital doesn’t have to repeat the same tests. It’s a good system, but it hasn’t been used to its fullest potential where medicine is concerned. We’re trying to develop a way to get it to keep track of deprescribed medications.

Q: I’d guess that patients would generally be happy to be on fewer medications, but are they concerned when you suddenly tell them to stop taking what they were told was an important medication?

A: Sometimes because people are in the habit of taking their medications and have been constantly reminded by their providers to take their medication, and have been told they’re going to have to take it for the rest of their lives.  That’s not always the case. As your body ages, it changes and may require less medicine or it may need to be switched to something else. Patients are sometimes resistant because it goes against what they’ve been taught. And doctors aren’t necessarily trained to present it to patients in a way that makes sense. “I know I’ve been telling you one thing all these years, but now we need to adjust it.” If it’s explained clearly, most patients are comfortable with it and happy not to be swallowing 20 pills a day.

“We’ve been working together for the last few years trying to address this problem of older adults taking medications that might do them more harm than good.”

Q: What impact is this having on physician culture, particularly where the idea of medication compliance is concerned?

A: I think you’re onto something. The culture has traditionally been “these are the medications, do what the doctor says,” and if you have side effects, you have to put up with them. I think people need to be more willing to ask questions about side effects and how the medication is supposed to help. I think younger patients are already demanding this; older adults seem more  inclined to default to the doctor knows best. We are knowledgeable and trained, but we don’t know everything that’s going on with you. It’s important to express your concerns and communicate with your physician. You want to avoid situations where the patient goes home, reads the list of side effects, decides not to take the medication and never tells their doctor. That’s counterproductive. We want the patient to know what benefit they’re potentially getting from the medication as well as what harms could potentially come from taking the medication and decide whether they want to take it. Some patients would rather just do what the doctor says. We want patients to think about and take charge of their health. A lot of medications we prescribe have only a little bit of a benefit and patients believe they have a lot of benefit.

Q: That touches on my next question: for cases where there’s no replacement medication, how serious is it to tell a patient to stop a medication?

A: It depends on the situation, but it means asking, what are the risks and benefits of stopping a medication?  And if the patient stays on a medication, they still need to know how much the medication lowers the  risk, and what the side effects are.

A: Overall, I think, yes, especially for older adults. There’s a culture of more medicine is better. I think we overestimate the benefits and underestimate the risks, especially relative to other ways of staying healthy like being more active, socializing more and eating better.