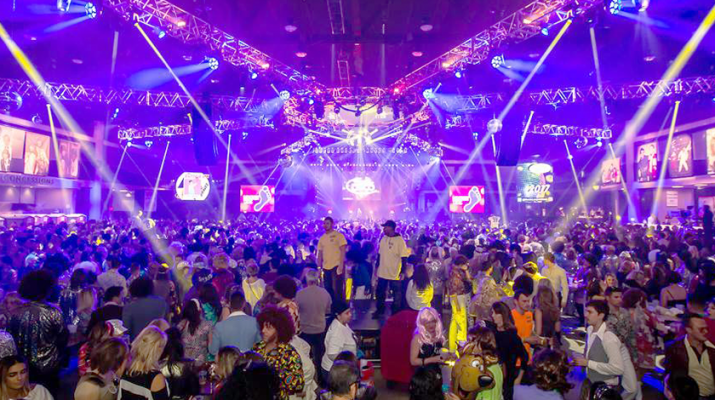 Lights, platform shoes and big hair. What else would be expected on the largest dance floor in New York state?

Voted as “The Greatest Event on Earth” by Festivals.com, the World’s Largest Disco started as a small idea in hopes of raising money and awareness to support beneficial charities, all while having fun, of course.

Not only did the idea turn into an event heard about all over the country, it also became a major contributor to a local organization helping families touched by cancer.

“Not only is it the greatest party in the world, but all proceeds help to send some very special children to Camp Good Days and Special Times,” said Wendy Mervis, executive director of Camp Good Days and Special Times. “All of our program and services are free of charge to the participants and this is only possible because of so many generous individuals and special events such as the World’s Largest Disco.”

Camp Good Days and Special Times, Inc. is a nonprofit organization dedicated to improving the quality of life for children, adults and families whose lives have been touched by cancer and other life challenges.

In 2018 alone, the National Cancer Institute reported that “an estimated 1,735,350 new cases of cancer will be diagnosed in the United States and 609,640 people will die from the disease.”

With this reality hitting home to so many local families, partaking in an event like the World’s Largest Disco doesn’t only mean a powerful message is being shared. It also means every cent being spent is going to a local family facing this illness.

“It is one of the most popular events in Western New York because of its uniqueness, its fine attention to detail, and pure fun,” said Lisa Booz of the Camp Good Days and Special Times Buffalo office. Each year, there are improvements to ensure guests are given the best experience to keep them coming back as part of their Thanksgiving tradition.

Chairman of the World’s Largest Disco, Dave Pietrowski, has been involved since the event was revived in 1994.

The fundraiser has been an important part of his life not only because of the surprise celebrities in the photo booth or ‘70s musical guest, but because of the message it holds. Without Camp Good Days and Special Times and the other organizations that have been involved over the years, it wouldn’t be the purposeful, life-changing event it has become.

“We have donated over $5,000,000 to charity since we started throwing the party in 1994,” explains Pietrowski. “The group that puts it on is 100 percent volunteer. This year’s charity is, again, Camp Good Days and Special Times.”

The event originally started in 1979 and was later revived in 1994. Pietrowski said the event is unique not only because of its history and size, but because “95 percent of the guests come dressed like it is 1979.”

Musicians originally showcased were Gloria Gaynor and The Tramps, and many other era-based guests continued to make appearances such as Barry Williams (Greg Brady) and Chris Knight (Peter Brady) of “The Brady Bunch” fame.

Every year, more musical and celebrity guests surprise a crowd of 7,000.

“It seriously is the greatest people-watching event you will ever attend,” Pietrowski said. “People are laughing, smiling, and singing along to the music all night. Some of the outfits belong on a reality show. For many years, there were more limos rented on the night of the event than any other night of the year – including New Year’s Eve.”

General admission tickets are priced at $77.50.

However, tickets sell quickly because so many Western New Yorkers want to experience the biggest party of the year. Even if the tickets do sell out before you are able to purchase one, donations to Camp Good Days and Special Times are always welcome.

“Put your platform shoes on and dance the night away with 7,000 of your closest disco friends,” Mervis said.